Here is some context for the following article. It was written in Serbian, for Serbian audience, published in Belgrade weekly newsmagazine NIN on 19 November 2020. Events in the UK, and explanations of how the British society has dealt them, are presented to demonstrate how a democratic system works with all its faults. Serbia is currently experiencing severe oppression of press and undermining of democracy on every level, from fair elections to political accountability. Without exaggeration, there is currently no opposition in Serbian Parliament or voices critical of the governing party on any news outlet with the national coverage. 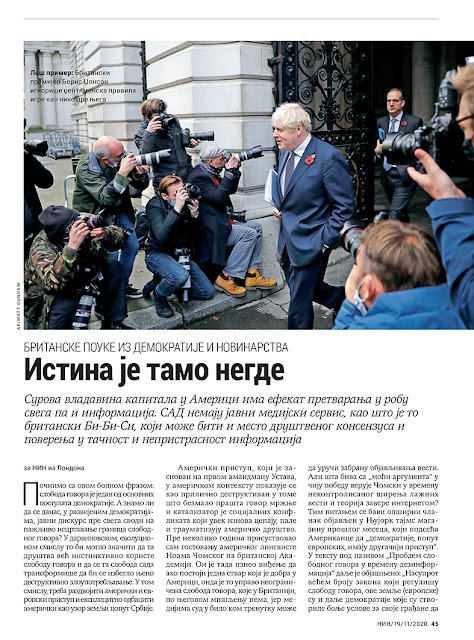 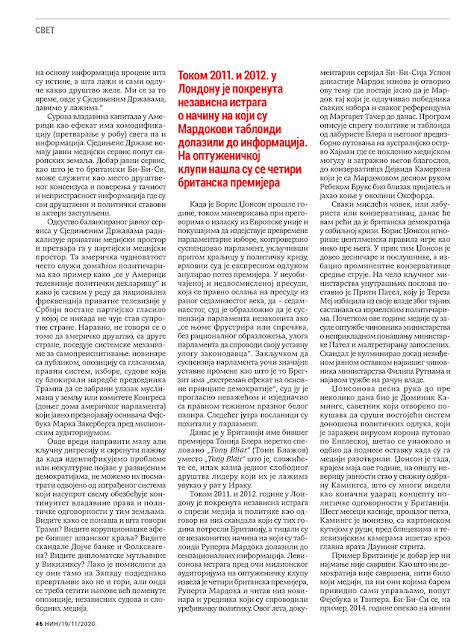 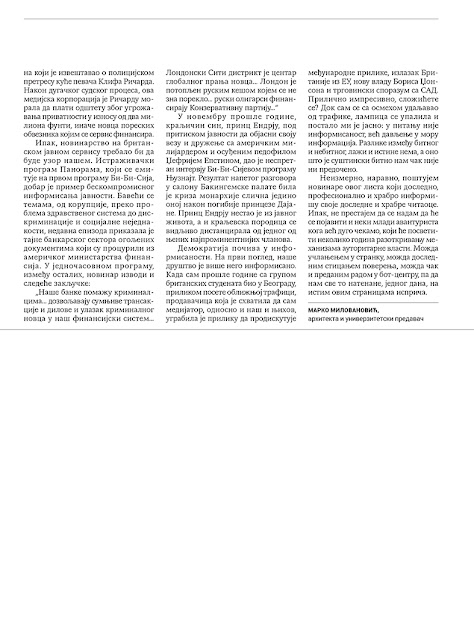 British Lessons in Democracy and Journalism

Truth is Far Away

Let's start with this painful cliché: freedom of speech is the foundation of democracy. But, are we aware that nowadays, in developed democracies, public discourse is primarily centred around careful rethinking of the boundaries of free speech? In a Darwinian, evolutionary sense, this could mean that these societies are already instinctively using freedom of speech and that this freedom is now evolving further to avoid being abused. We should make a distinction between America and Europe, and we should explicitly reject the American approach as a model for a country like Serbia.

The American approach, which is based on the first amendment to the US Constitution, proves to be rather destructive in that it practically pardons hate speech and it is a catalyst for social conflicts that repeatedly tear, burn and traumatize American society. A few years ago, I attended a talk by American linguist Noam Chomsky at the British Academy. He expressed the view that if there is one thing that is good in America, that is the limitless freedom of speech. He claimed that in Britain such freedom does not exist, because courts can issue an injunction on publication of information at any time.

Chomsky believes in the "power of argument". But what happens to arguments, at the time of uncontrolled spreading of lies and conspiracy theories on the Internet? This issue is addressed in an extensive article published in the New York Times Magazine last month, which reminds Americans that "democracies, like European ones, have a different approach".  The article titled "The problem of free speech in an age of disinformation " further explains: "Despite more regulations on speech, these countries remain democratic; in fact, they have created better conditions for their citizenry to sort what’s true from what’s not and to make informed decisions about what they want their societies to be. Here in the United States, meanwhile, we’re drowning in lies."

An effect of the cruel rule of capital in America is commodification of everything, including information. The US does not have a national broadcaster like European countries. A good public service such as the BBC can serve as a place of social consensus and trust in the accuracy and impartiality of information, where all social and political sides are represented.

The absence of a balanced national broadcaster in the United States radicalizes the private networks, turning them into political party outlets. This peculiarity of the American system is often used by politicians in less developed democracies as an example of how "television channels are party affiliated in the US"​​and that it is absolutely fine for a broadcaster with the national coverage in Serbia to be a party channel, where the views of opposition are never heard. Of course, there is no mention that American society, unlike ours, has a functioning system for self-reflection: journalists with an audience, opposition with voters, the legal system, free elections, courts that blocked President Trump's orders to ban Muslims from entering the country or congressional committees which publicly roast Facebook founder Mark Zuckerberg in front of millions of viewers.

Here, we should make a small but crucial digression and point out that, when we identify problems or recklessness in developed democracies, we cannot isolate those issues from the system that still ensures the rule of law and political responsibility in those countries. Look at what Trump says and how he behaves! Look at the corruption scandals of the former Spanish king! Look at the scandals of Deutsche Bank and Volkswagen! Look at the diplomatic dirt that came from WikiLeaks! It is easy to think that the west is equally as bad as us, if not worse. But then, again, let’s remember their opposition, independent courts and free media.

When Boris Johnson controversially suspended parliament last year, while manoeuvring around Brexit negotiations and attempts to call a snap-elections, dragging the Queen into a political crisis - the Supreme Court swiftly outlawed the prime minister's move. In an unusual and unambiguous verdict, which legally rested on an early seventeenth-century case, yes – seventeenth century, the court argued that a parliamentary suspension is illegal "if it has the effect of frustrating or preventing, without reasonable justification, the ability of Parliament to carry out its constitutional functions as a legislature". Concluding that the suspension of parliament in the face of significant constitutional change such as Brexit has "an extreme effect on the basic principles of democracy", the court declared it invalid and compared its legal significance to a blank sheet of paper. The following day, MPs headed to the Parliament.

Today in Britain, the name of former Prime Minister Tony Blair is often spelled "Tony Bliar", which, you will agree, is a subtle punishment of a free society for the leader who told lies to drag the country into the Iraq war. In 2011 and 2012, an independent inquiry was launched in London, to investigate connections between the media and politics, in response to a series of scandals that shook the county, concerning the illegal ways in which the tabloids of Rupert Murdoch obtained sensational information. The Leveson Inquiry publicly interrogated four British prime ministers, Rupert Murdoch, and a whole host of journalists and editors who delivered editorial policies. This summer, the BBC documentary series "The Rise of the Murdoch Dynasty" reopened this topic, where it become evident that Murdoch was the kingmaker in every election and every referendum since Margaret Thatcher. The program describes the toxic relationship between politics and tabloids from Labour's leader Blair and his pre-election trip to the Australian island of Hyman, where he bowed to the media mogul and asked for his support, to the conservative David Cameron, who was a close friend of Murdoch's right-hand woman Rebecca Brooks and rode horses with her in the countryside near Oxford.

Despite all that, most thinking people, Labour or Conservative, will tell you that British democracy is in crisis today. Boris Johnson is ignoring the unspoken rules of the game like no one before him. Johnson brought right-wingers and loyalists to the front benches, knocking out prominent centrist conservatives. He appointed Priti Patel as Home secretary, a woman who Theresa May fired from her cabinet because of Patel’s secret meetings with Israeli politicians. At the beginning of this year, a series of accusations emerged from the Home Office officials, describing Patel as a bully who harassed a number of department’s employees. The scandal culminated in the most unusual public resignation of the department’s highest official Philip Rutnam who also announced a lawsuit against the government for constructive dismissal.

Until recently, Johnson's right-hand man was Dominic Cummings, an adviser who openly tried to overthrow the existing system of political decision-making; who, while infected with the coronavirus, travelled around England, went for walks and refused to resign when media broke the story about his whereabouts. When that happened at the end of last May, Johnson strongly stood by Cummings to the absolute disbelief of the public. Many saw that as a final blow to the concept of political responsibility in Britain.

Six months later, however, Cummings walked out very publicly through the main door of 10 Downing Street with a cardboard box in his hands.

The example of Britain is good precisely because it is not perfect. Just as democracy is not perfect, nor are any news outlets, including those that are, at least seemingly, controlled by us, like Facebook and Twitter. The BBC, for example, got itself into trouble in 2014 following its coverage of a police raid of singer Cliff Richard’s house. After a long legal battle, the BBC had to pay Richard two million pounds in settlements, of taxpayers' money which finances the service.

Yet, journalism on the British national broadcaster should be an example to follow for our national broadcaster. The investigative program Panorama, which airs on BBC One, shows how the public should be informed without compromise and pressures from the political establishment. Addressing topics ranging from corruption, problems in the healthcare system, racial discrimination and social inequality, a recent episode revealed the secrets of the British banking sector, exposed by leaked documents from the US Treasury. In the one-hour program, among others, the journalist draws the following conclusions: Our banks help criminals… allowing suspicious transactions and influx of criminal money into our financial system… The City of London is the global centre of money laundering… London is flooded with Russian cash of suspicions origin… Russian oligarchs finance the Conservative Party.

In November last year, the Queen's son, Prince Andrew was pressured by the public to explain his relationship and friendship with the American billionaire and convicted sex offender Jeffrey Epstein. The result was an awkward interview to the BBC's "Newsnight" program. After a tense conversation in Buckingham Palace, what followed was a crisis of British monarchy only comparable to the one when Princess Diana died. Prince Andrew disappeared from public life, and the royal family visibly distanced itself from one of its most prominent members.

Democracy only works if the society is properly informed. At first glance, we are more than informed. When I was in Belgrade with a group of British students last year, during a visit to a nearby kiosk, a saleswoman who realised that I was a mediator, both ours and theirs, seized the opportunity to discuss international affairs, Britain's exit from the European Union, Boris Johnson's new government and a trade deal with the United States. Pretty impressive, you would say? As I walked away from the kiosk with a smile on my face, I realised: we are not informed, we are drowning in a sea of ​​information. There is no difference between what matters and what doesn’t matter, truth and lies, and what is truly important is not even presented to us.

Of course, I have immense respect for the journalists of this paper, who with integrity, courage and professionalism inform their principled and brave readers. At the same time, I continue to hope that one day, a young adventurus journalist will appear, whom we have been waiting for a long time, who will dedicate a couple of years to revealing the mechanisms of authoritarian rule. Maybe, by joining the party, maybe by diligently gaining trust, maybe even by dedicated work in the bot centre, so that one day, she or he, can tell us all about it, on these, same, pages.