Cracks in Peace Walls, On Northern Ireland and the unity of the Kingdom, NIN, May 2021, Belgrade 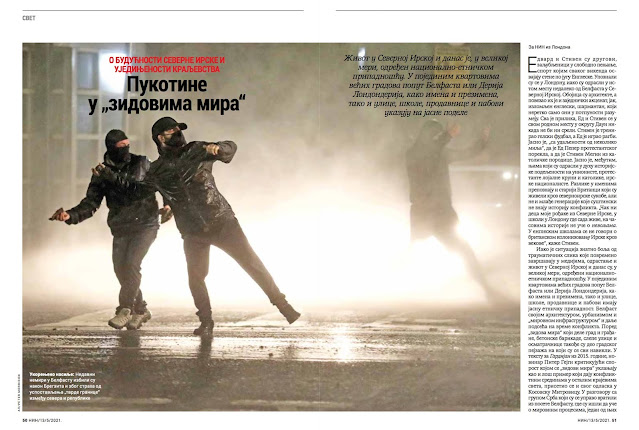 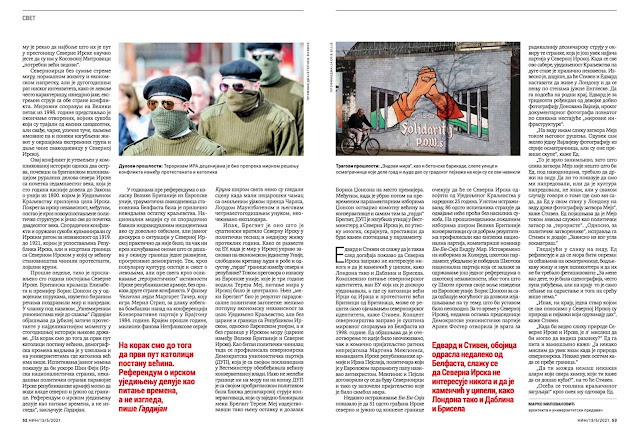 Edward and Stephen are friends. Almost every weekend they climb rocks in the south of England. They met in London, although they grew up in the same area not far from Belfast, in Northern Ireland. They are both architects, and they also bonded over an accent they speak, conspicuous, charming English, that often, only they fully understand. As things stand, Ed and Stephen wouldn’t have met in their hometowns in County Down. Stephen played Gaelic football and Ed played rugby. It is clear from "miles away", that Ed Pepper is from a Protestant background and that Stephen Maginn is from a Catholic background. It is clear, however, to those who grew up in the spirit of historical division between unionists, Protestants loyal to the Crown and Catholics, Irish nationalists. Differences in names are also recognised by older Britons who lived through the Northern Ireland conflicts, but not by younger generations who do not quite know the history of the conflict. "Even my aunt's children from Northern Ireland, at their school in London, where they now live, do not learn about the Troubles in their history lessons. English schools don't talk about British colonisation of Ireland across centuries," says Stephen.

Although the situation on the ground is much better than what one would assume from the traumatic images that occasionally end up in the media, growing up in Northern Ireland even today is largely determined by ethnic background. In some neighbourhoods of larger cities like Belfast or Derry/Londonderry, both names and surnames as well as streets, schools, shops and pubs have an ethnicity. With its architecture, urbanism and "peace infrastructure", Belfast still evokes the time of the conflict. In addition to "peace walls" that divide the city and its citizens, concrete barricades, dead ends and old checkpoints are also part of the cityscape to which everyone is accustomed. In his 2015 Guardian article, journalist Peter Geoghegan criticises the slowness with which peace walls are being removed, as well as the bad example they set for conflict regions in other parts of the world. He recalls his trip to Mitrovica in Kosovo and a conversation with a group of Serbs who had just returned from a visit to Belfast, where they were learning about peace processes. One of them told Geoghegan that the best thing they had learned during their stay in the capital of Northern Ireland was that they "needed bigger walls" in Kosovska Mitrovica.

The people of Northern Ireland undoubtedly strive for peace and economic progress, but the long, low-intensity war, as the Troubles are often characterised, has generated groups of extremists on both sides of the conflict. The Good Friday Peace Agreement of 1998 marked the end of open, military conflict that had lasted since the late 1960s, but occasional quarrels, street fights, arson and even some lives lost in clashes between extremist groups continue to happen.

This conflict is rooted in the complex history of relations between the two islands, beginning with the British colonisation of rural parts of northern Ireland in the early seventeenth century, which led to the Union Act of 1800, which annexed all of Ireland to the United Kingdom. The Irish independence movement, however, survived through newly established political structures and further strengthened until the beginning of the twentieth century. Sporadic confrontations and armed conflicts culminated in the Irish War of Independence from 1919 to 1921, which established the Republic of Ireland but also delineated the border with Northern Ireland, where the majority of population were Protestants, loyal to the Crown.

The 100th anniversary of Northern Ireland was quietly celebrated last week. In separate statements, British Queen Elizabeth and Prime Minister Boris Johnson saluted peace and progress in carefully chosen words. In an article titled "Anxious unionists in little mood to celebrate North Ireland centenary ", the Guardian explains that the anniversary finds Protestants at the most delicate moment in the hundred-year history of their country. "The centenary comes at arguably the most fraught moment for unionism in the state’s eventful 100 years. Catholics are on the cusp of outnumbering Protestants for the first time – a demographic shift apparent in Catholic majorities in schools and universities. Opinion polls suggest Sinn Féin (the Irish Nationalist Party, a former political branch of the paramilitary Irish Republican Army) could lead the next governments north and south of the border. A referendum on Irish unity seems a matter of when, not if", the Guardian concludes.

In the years before the referendum on Britain's exit from the European Union, the traumatic everyday life of the people of Belfast was quite invisible to the rest of the Kingdom. The national media sporadically covered individual incidents if they were serious enough, but there was virtually no public discourse on the situation in Northern Ireland, not even through astonishment at what is happening within the borders of a developed, progressive democracy. Only, through popular culture, the awareness of the Troubles survives, but above all through the depiction of "terrorist" activities of the Irish Republican Army, without showing the other side of the conflict. In the film The Iron Lady, Margaret Thatcher, played by Meryl Streep, narrowly escapes the bombing at the Conservative Party conference in Brighton in 1984. Late last year, millions of fans around the world of the Netflix series the Crown watched the jaw-dropping scene when a small fishing boat with Prince Charles' favourite uncle, Lord Mountbatten, and his fourteen-year-old grandson, unexpectedly explodes.

Nevertheless, it was Brexit that brought Northern Ireland back into the political spotlight in recent years. How to divorce the European Union, when peace in Ireland is based on the economic unity of the EU, the free movement of people and goods and the absence of a "hard" border between the north and the republic? During the negotiations on leaving the European Union, which were led by Theresa May for three years, the issue of peace in Ireland was central. Her "soft Brexit" was the result of a paradoxical political conundrum: we want complete economic independence for the whole of the United Kingdom, but without customs and the border with the Republic of Ireland, ie the European Union, and without the border in the Irish Sea (customs between Great Britain and Northern Ireland). At that point, the Northern Ireland Democratic Unionist Party (DUP), which with its MPs in Westminster provided a majority to the conservative government, established itself as an important political factor. Although not wanting borders at sea or on land, the DUP, with its pro-British policy, was closer to the right-wing current in the Conservative Party, who together blocked Theresa May's soft Brexit, leading to her resignation and the arrival of Boris Johnson as prime minister. However, when Johnson won a comfortable majority for the Conservatives in snap elections and therefore secured support "hard" Brexit, the DUP lost its influence in Westminster, and so did Northern Ireland cease to be a stumbling block in Parliament.

Edward and Stephen agree that this series of events clearly showed that no one really cares about Northern Ireland, that it is a pain in the neck for both London, and Dublin and Brussels. The complex issue of the Northern Irish identity, outside the European Union that united the island until recently, and where Catholics are grater Irish than the Irish and Protestants grater British than the British, can only be solved by strengthening the Northern Irish identity, says Stephen. The concept of Northern Ireland is actually the corner stone of the 1998 Belfast peace agreement. Ed explains that the embodiment of that idea was an unexpected, even comic friendship of two war enemies Martin McGuinness, the commander of the Irish Republican Army, and Ian Paisley, a politician who referred to the Pope as antichrist in the European Parliament. McGuinness and Paisley settled on the idea of Northern Irishness and started a friendship that was a symbol of peace.

A recent BBC survey showed that 51% of Irish citizens north and south of the land border expect Northern Ireland to leave the United Kingdom in the next 25 years. In the same survey, 86 percent of those asked said that they fear that separation will not pass without violent conflicts. In last week's local elections across the United Kingdom, with good results, the Conservatives established themselves as the English national party, the BBC journalist Andrew Marr observes. At the same time, the Scottish National Party, which is in favour of holding another referendum on Scottish independence, won the elections for the Scottish Parliament. Their argument is that the Scots were pulled out of the European Union against their will. For now, Boris Johnson rejects the possibility of allowing such referendum. Meanwhile in Northern Ireland, the recent resignation of Democratic Unionist Party President Arlene Foster has opened the door to a more radical right-wing current within that party, which is still the strongest party in Northern Ireland. When all this is added up, the unity of the Kingdom in the long-term is quite uncertain.

It is certain, however, that Stephen and Edward will continue to climb rocks in the south of England. To remind him of home, for his thirtieth birthday, Edward’s girlfriend bought him a photograph by Donovan Wylie, an Irish documentary photographer known for his documentation of the disappearing "peace infrastructure".

"On my wall, I have a picture of Maze Prison during its demolition. I've always wanted one from his watchtower series, but they are too expensive, "says Ed.

"It's very interesting, because the picture of the Maze prison is not something that Ed, ‘should keep’ on the wall", Stephen explains. "Whether it shows that we are progressive people, or that the culture has progressed, I don't know, but in any case, it speaks of where we are now, that Ed has a photograph of Maze Prison on his wall in his apartment in London," says Stephen. Ed explains that Maze served as a political prison for "terrorists" during the Troubles. "For political prisoners," Stephen corrects him. "Depending on which side you look from."

Looking at the picture on the wall, Ed also reflects that one must be careful with memories of watch towers, barricades, the sound of helicopters and that we should not fetishise them: “For me as a child, it was almost a scenery, often full of excitement, now I see it just a memory of something that is not there anymore."

"At the end of the day, one thing that everyone is proud of in Northern Ireland is the breath-taking nature and landscapes," says Stephen.

"If you saw a picture of Northern Ireland and Ireland landscapes, do you think you would be able to tell the difference?" Ed asks him and says thoughtfully, "I kind of think I always know when I see Northern Ireland in pictures. I think, I can always tell when I cross the border."

"You’ve got some sort of alarm that tells you you’re home? With the national anthem?" Stephen asks.

"Warmth of the queen's embrace!" Ed answers through laughter.